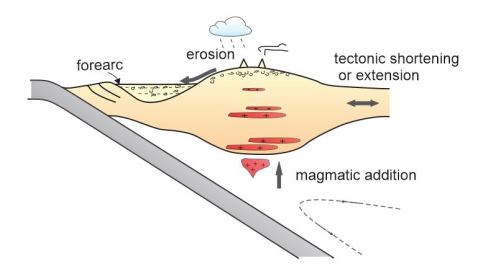 Continental arc magmatism has been considered to be an important CO2 source for global warming, since rapid addition of large volume of magma into the crust results in significant amount of volcanic degassing and magmatic decarbonation. However, at the same time, addition of volumetric buoyant Si-rich magma into the continental crust triggers isostatic rebound and uplift, leading to accelerated erosion. High elevation of the arc may enhance precipitation and change global atmospheric circulation patterns, thus considerable chemical weathering might take place. In this study, I explore the coupled magmatism and erosion processes in continental arcs, and try to estimate the erosional flux (both physical and chemical) in the Late Cretaceous Cordillera arc through hornblende barometry and trace element ratios in the forearc sediments. The goal is to better understand how tectonic forces contribute to regulating the long term (several tens to hundreds of million years) carbon cycle.

Part of this study has been published in Jiang 2017 EPSL, and presented in a poster in AGU 2017 (session PP018: Evaluating Tectonic Forcings on the Long-Term Carbon Cycle). Manuscript is in preparation.

Groundwater is important in development of ore deposits, fossilization, and diagenesis in basin evolution. For ancient systems, timing and conditions (pH, redox, etc.) for the groundwater events are often poorly constrained. Petrified wood is formed through permineralization process, in which the pore spaces of the wood structure were filled with silica as groundwater flowing through. As a direct groundwater product, petrified wood has the potential to record paleo-hydrologic events. Often, silicification of the wood took place during major volcanic ashfalls. These ashes provide not only Si, but also other trace elements (U, REEs, etc.) which can be used as proxies for groundwater conditions.  In this study, I collected petrified wood from the Upper Triassic Chinle Formation in Arizona, and developed LA-ICPMS methods for U-Pb dating for these woods. Combined with trace elements, the U-Pb dates unveil a rich history of basin development since the Late Triassic. This project has been published in Jiang2018ChemicalGeology.

Geochemistry and thermodynamics of ancient earthquakes

Pseudotachylite is formed through quenching of frictional melt during ancient earthquakes. This study attempts to get insights of the physics behind earthquake from a geochemical aspect. We analyzed pseudotachylite veins developed in a Late Cretaceous mylonite zone as the block went through the ductile-brittle transition zone. Geochemistry of these pseudotachylite veins suggests disequilibrium melting, and in particular, preferential melting of biotite, which is concentrated in the pre-existing fabrics in the mylonite. Apparently, the biotite-rich zones developed through mylonitization became weak zones where strain was localized during brittle deformation. We built simple frictional heating models to explain the compositional trend, and we found out that the chemical features in the pseudotachylites can potentially be used to constrain the thermodynamic conditions in the shear zone as well as earthquake source mechanics. This study has been published in Jiang2015EPSL.